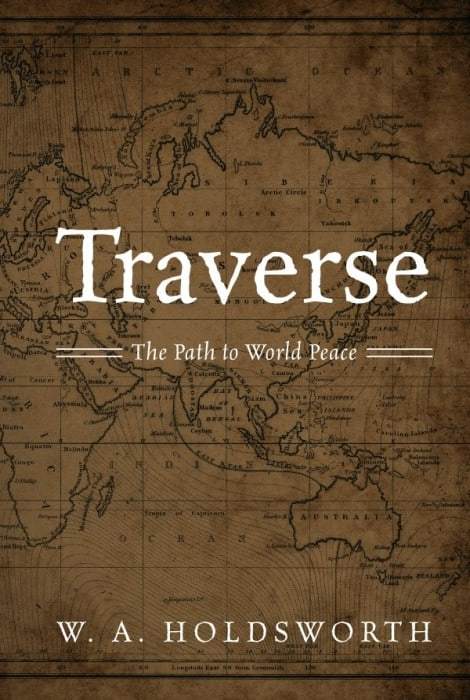 Many believe a worldwide government will herald the end of freedom and democracy, the second coming of Christ—a time of great tribulation. Others believe it will finally bring about a just, compassionate, worldwide society—a time of true equality and enlightenment. Either way, what would bring about such a world? And, more importantly, who would lead it?

Traverse intertwines the seemingly disparate destinies, fortunes, and crimes of characters from vastly different backgrounds who come together to challenge the political and moral foundations of the world. William Cameron MacCrarey, a man about to be thrust upon the world stage and pushed to his emotional and intellectual limits. Merrill MaGeah and Kyle Dunham, Elders of the Clan Camulodunum, who wish to cast upon the world stage a man for whom the Clan was founded more than 1,500 years ago. Secretary-General René Boujeau, leader of the only worldwide organization in history, who desires to recast the United Nations into his own personal empire. And Under Secretary Gerhardt Schoen, a cold and brutal man who will stop at nothing to fulfill what he believes is the birthright of his Germanic ancestors.

What will happen in the end? Will a single world-wide government herald a time of prosperity, freedom, justice, and equality? Will it bring to power a man of monstrous beliefs bent on creating a despotic empire, or a man of enlightenment and humanity? Traverse lays bare the fallacies of our modern world, builds upon the enduring truths of history, and takes the first step towards humankind’s next great intellectual age—the Age of Peace.

Hello book lovers! Today is a day where I will be writing another author spotlight for a well-accomplished author whose work I have loved. As you know book lovers I love learning about authors and the inspiration behind their work, it fascinates me and adds to the depth of the book because the reader will be able to better understand it. That is how the author spotlights were created because I soon discovered that you lovely readers ALSO love learning about author’s, so I am excited to tell you a little bit more about author W. A. Holdsworth whose book Traverse captivated me from beginning to end. I personally would recommend this book to all of those that love action and adventure but really the book can be read by anybody as it is flawlessly written and highly enjoyable. With today’s author spotlight for W. A. Holdsworth, a biography of the author and an interview between us both will be shared, and I hope that you book lovers enjoy reading it! To kick this off here is an author bio about the wonderful W. A. Holdsworth!

W. A. Holdsworth was born in Chicago in 1961 and lived in several states before settling in Michigan. He spent his summers in Traverse City and still vacations there every year, as does the protagonist of his novel Traverse. Mr. Holdsworth attended the University of Michigan and Oakland University, earning an engineering degree and serving as President of the engineering school’s honor society. After two years with General Electric, he enrolled at Michigan State University and earned an MBA. The following 30 years were spent working first as a management consultant, as President of a professional association, and as a Director for one of the largest counties in the U.S.

Not much of a reader as a youth, he began listening to Books On Tape during business trips. He soon became an avid reader of classic and contemporary adventure novels, and indulged his life-long interest in history, science, philosophy, and religions. It wasn’t until his late thirties that he began writing while working and raising a family. A fan of the Arthurian legend, he wanted to bring the story of Arthur and Camelot into the modern world with a novel that was both exciting and meaningful. The result was Traverse, self-published in 2015, and its sequel Novum Orbis Regium, due to be published in August of 2019. He is now writing the next book in the trilogy.

Now, how wonderful does W. A. Holdsworth sound?! The author is a truly exceptional writer and I hope that you lovely readers have a read of the author’s work because you will not regret it! Please see below an interview between us both, I hope that you enjoy the author’s answers to my questions, they are incredible and provide some great advice too!

Thank you for joining us today at Red Headed Book Lover! Please tell us more about yourself and what inspired you to write your book.

While I wasn’t much of a reader as a youth, I was always a fan of adventure stories. In my twenties, I began listening to Books On Tape during business trips and quickly became an avid “reader” of classic and contemporary adventure and thriller novels. I also read quite a bit of non-fiction. I especially love novels that combine a fictional adventure story with real-life history, science, philosophy, or religion. About 20 years ago, I felt as though my job had become my life and I needed something to balance it out, something intellectually challenging but creative and fun. That’s when I started writing. Not that writing is all fun, but it is very rewarding – especially when a story or a chapter or even a single paragraph finally falls perfectly into place. When I started writing, I wanted to create a novel that was entertaining, but also important. I wasn’t going to spend years on something superficial or trivial. It had to have a message. It had to educate. It had to inspire. Well, I’m also a fan of classic King Arthur novels, particularly T.H. White’s The Once and Future King, so I came up with the idea of King Arthur in today’s world. The result was Traverse.

Could you please tell us readers about your book?

It starts out in a small midwestern town with the main character, Mac, at the lowest point in his life. Then it takes the reader to New York, Great Britain, Geneva, Kenya, Cyprus…it weaves in political intrigue at home and abroad…there are conspiring senators, a popular televangelist, a neo-Nazi group, a megalomaniacal Secretary-General and his ruthless second in command…it’s a real roller coaster of a book!

You have to have something important to say. You have to understand that great writing takes a tremendous amount of work. And in the end, you have to be able to set your work beside your favorite author’s work and honestly say that one is just as good as the other.

Again, it has to say something important. Otherwise, the reader is wasting their time.

What makes for a great read?

The author has to achieve three goals. First, the reader needs to care greatly for the characters. That comes with empathy or self-identification. Ken Follett, for example, shares a great deal of his character’s personal lives and feelings with the reader. Second, the reader has to be taken on an adventure. And third, there has to be something important at stake or to be achieved.

How do you go about writing a book? Do you do a lot of research? Do you write to a schedule or when you feel inspired?

When I think I have a great idea for a story, I let it sit for a while and revisit it later to see if it still seems like a great idea. Often, it won’t. The ideas that hold up are ones that are most visceral, most emotional either good or bad. There are times when an idea will actually send a chill down my spine.

Once I have an idea (or several ideas) that hold up, I’ll work it (them) into an outline. Then I’ll read several books on the subjects at hand and flesh out the outline. The outline becomes something like a tree with branches, and I’ll start writing passages for this branch or that as more ideas occur to me or as something inspires me. Eventually, I write segues to transition from one branch to another and flesh out the overall story – kind of like running from one roller coaster to another in an amusement park.

As for a writing schedule, I have a full-time job, a home, and a family so my writing takes place in short intervals throughout the day. I do try and set a goal each day, though, in terms of total time spent writing.

The sequel to Traverse – Novum Orbis Regium – is scheduled to be published in August of 2019 by Adelaide Books.

Its official book lovers, I am obsessed with W. A. Holdsworth! If you have liked what you have read about the author and are interested in learning more about W. A. Holdsworth, then please do have a browse of the links below and be sure to have a read of the preview too! You will not regret it.