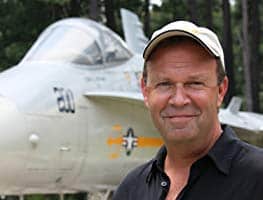 He dies … and wakes up in a genetically perfect body.

Navy Commander Josh Logan’s fighter catches on fire during a routine test flight. Preventing it from hitting a neighborhood, he ejects too late. A year later, he wakes up in a city hospital looking like an omni-racial Olympic athlete. His body wasn’t repaired … it was replaced. The good news – he’s now a genetic blend of humanity’s best genes with one-in-a-billion abilities. The bad news – a voice in his head tells him an impact will soon erase life on earth.

A Navy pilot brought back from the dead … to save the world?

The most likely explanation is paranoid schizophrenia with delusions of grandeur, but with no identity and few options, he uses his insider knowledge of classified military projects to create a fake black program. Recruiting a brilliant international team, they secretly develop the world’s most powerful weapon to … protect humanity?

Hello book lovers! Today is a day where I will be writing another author spotlight for a well-accomplished author whose work I have loved. As you know book lovers I love learning about authors and the inspiration behind their work, it fascinates me and adds to the depth of the book because the reader will be able to better understand it. That is how the author spotlights were created because I soon discovered that you lovely readers ALSO love learning about author’s, so I am excited to tell you a little bit more about author David E. Stevens whose book Impact thrilled me from beginning to end. I personally would recommend this book to all of those that love science fiction but really the book can be read by anybody as it is flawlessly written and highly enjoyable. With today’s author spotlight for David E. Stevens, a biography of the author and an interview between us both will be shared, and I hope that you book lovers enjoy reading it! To kick this off here is an author bio about the wonderful David E. Stevens!

Commander Dave Stevens was a nuclear weapons qualified Navy fighter pilot. He served as Strike Operations Officer for the Persian Gulf during the Iraqi invasion of Kuwait. With a Top Secret clearance, he led classified defense programs, test piloted new F-18 fighters and earned an aviation patent. He’s sailed around world, been to over 30 countries, 10 miles above the earth, 600 feet below the Atlantic and survived hundreds of his own carrier landings. Dave has aerospace engineering degrees from Cornell and the University of Michigan, with graduate work in astrophysics and statistics. With an Advisory Board of renowned experts, he creates reality-based stories to entertain and warn.

Now, how wonderful does David E. Stevens sound?! The author is a truly exceptional writer and I hope that you lovely readers have a read of the author’s work because you will not regret it! Please see below an interview between us both, I hope that you enjoy the author’s answers to my questions, they are incredible and provide some great advice too!

Thank you for joining us today at Red Headed Book Lover! Please tell us more about yourself

Thank you for having me. Your support of military charities is awesome and, as a veteran, hugely appreciated! Thank you!

In a nutshell, I’m an engineer by education and Navy fighter pilot by vocation. I’ve always enjoyed telling stories but writing came a lot later and was motivated by events in my life. Being able to use my experiences and those of friends and colleagues is kind of cheating, but it makes writing a lot easier and more fun. Many of the events that happen in the story happened to me or, like flying into a Typhoon, happened to a friend.

My good friend who I went to college with and was a flight-school roommate was killed in a crash. During a night low-level mission, his jet hit the ground with no ejection attempted. The accident that claimed his life kills 60% of all tactical jet pilots. I almost did the same thing a few years later. When we’re overloaded, we tend to lose situational awareness and ignore warnings … so I created a virtual altitude warning system. It used peripheral vision cues to trigger a “falling sensation,” and literally scare the pilot into reacting. It worked. It received a government patent and was ranked #1 for DARPA funding.

After the Navy, I studied cataclysmic disasters and realized pilots weren’t the only ones who needed “scaring.” We’re all very good at ignoring things that can kill us. What if we could identify the most deadly threats to the human race and scare ourselves into doing something about them? Using Probabilistic Risk Analysis, I determined the top apocalyptic, preventable threats to us, and in some cases, all life on earth. Ironically, the Fuzed Trilogy uses fiction to make the threats real. We are all more likely to pay attention to a good story than a series of facts.

Landing on aircraft carriers and training to drop nuclear weapons makes you consider your own mortality, not to mention the survival of the human race. Since Issac Newton demonstrated the world operates under natural laws, science and religion have collided. Today quantum physics and cosmology, with multiple dimensions, singularities, etc., are so bizarre they’re starting to look like what most of us would have considered the spiritual in the past. At the cutting-edge of physics, could science and the spiritual one day intersect?

Don’t worry about format or style initially. Just write. Get the ideas on screen or paper. After that, get LOTS of critique and professional editing. I was fortunate enough to be picked up by Literary Agent Terry Burns. The first thing he did was assign me to an editor, Normandie Fisher, who beat the crap out of me. I couldn’t have told you what a dangling participle or head-hopping meant. Later Jenny Ward of Lion Hudson Books took over. Both taught me what I should have learned in school. Taking writing courses or attending writing conferences isn’t a bad idea either but don’t wait to write

The message inside. Of course, if the story isn’t compelling the message will be lost.

In the case of this trilogy, it’s the warning. It isn’t a question of whether things like Artificial Intelligence will surpass ours or whether the earth will get hit by an asteroid or comet capable of wiping out most life on earth. It’s only a question of when. We now have the ability to completely prevent these types of disasters if we will take action. Currently, we’re doing very little. Astronaut and Stanford physicist, Dr. Ed Lu, summed it up. Referring to the Las Vegas truism that “the house always wins,” he said, “We’re not the house.”

The series is backed by a non-profit called the Fuzed Foundation www.fuzed.org. A percentage of all profits from the books and future movie or series will go to non-profits working actively to protect humanity.

I start with the end in mind and model many of my characters on people I know. Then I let them figure out how to get to the end. Sometimes they decide to go in different directions lol.

Since these stories have a message inside — warning of preventable disasters that face humanity — it’s critical to get the facts right. So, I do a lot of research but I also depend on experts. My advisory board includes Ken Bowersox – an International Space Station Commander, Dr. Ed Lu – astronaut and former Google Advanced Projects Director, Special Forces and Intelligence operatives, Admiral Joe Dyer – who was in charge Navy Weapons development and COO of iRobot, Dave Lavery – NASA’s Program Executive for Exploration of the Solar System, the Weather Channel meteorologist Jim Cantore, leading astrophysicists, an internationally renowned theologian, etc.

No schedule but when I’m in the zone I can write until my hands hurt.

Yes. Probably more non-fiction than fiction but some of my favorite authors are Arthur C Clark and Tom Clancy.

I’m working on the 4th book of the trilogy now … I don’t count very well. When originally outlined, I had only 3 major threats that I wanted to cover but during the writing, a reader pointed me to new threat that had just surfaced in the area of genetic engineering. Called Gene Drive, there’s a terrifying TED talk on the topic. So, I had to add that as a fourth story.

Its official book lovers, I am obsessed with David E. Stevens! If you have liked what you have read about the author and are interested in learning more about David E. Stevens, then please do have a browse of the links below and be sure to have a read of the preview too! You will not regret it.