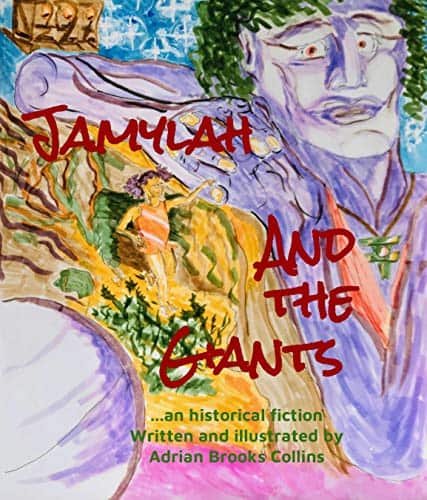 During Jamylah’s 8th birthday pool party she slips out of body, as the result of a minor swimming mishap.  While aloft she’s visited by the spirit of Temuh, an ancient Talligewi Giant whose civilization consumed her very property, some twelve thousand years earlier.  Temuh asks for Jamylah’s help in restoring their plundered burial mounds.  She agrees then quickly follows her body to the hospital where she rejoins her former self.

Once Jamylah’s given a clean bill of health she recounts her mysterious journey to her disbelieving parents over breakfast.  They doubt her tall tale until she mentions that daddy had locked his keys in the trunk during all the commotion, which in fact had happened, while she was still very much unconscious.

Emboldened by her quest to restore the Giant’s burial mounds, Jamylah at her mother’s suggestion, constructs one such Giant from memory for Show and Tell.  Once Jamylah reveals to her highly impressed teacher that she learned all this from the Giants themselves; Jamylah inadvertently becomes the laughing stock of almost the entire school.

Fortunately a chance meeting with Percy the maintenance man reveals that he too knows of the Giants’ history, with their distinctive double rows of teeth.  Finding Jamylah talking to Percy about the Giants further irritates Alonso, her father, who admonishes Percy for “filling her head with fairytales.”

Undeterred Jamylah elects to record a Youtube video on her experience which quickly goes viral.  Soon the alien Men In Black pay her a visit and when Jamylah takes their picture; the spirits of two Giants are revealed standing behind them.  This is where the Men in Black exit and, when pursued by Jamylah and her family, disappear with their car, in mid air.

By now local news media has caught on and Jamylah is becoming a local celebrity, even getting an invitation to the governors’ ball. With this notoriety comes a visit from the real Men In Black, the Secret Service, only this time Jamylah’s family isn’t so gullibly playing along.

That night Jamylah is taken up by Temuh and Lathrii into a UFO to visit their home planet in the Pleiades constellation.  A trip her mother Constance doubts until a news bulletin confirms a UFO siting and eyewitnesses to a particle-beamed, abducted child.  With Jamylah’s prophecy of the Tallagewi’s return the US military meets their UFOs head on, but their military weapons are frozen.

First a visit to the local library and then out to Percy’s family farm, reveals that in fact a race of giants certainly did once live in Ohio.  As the family examines Temuh’s tomb, atop the only mountain on the sprawling 200 acre farm, a violent thunder storm erupts.  Just then, the FBI arrive with heavy equipment and quickly scoops up Temuh’s 8’6” skeleton, ancient artifacts and the entire stone sarcophagus; carting it off on one enormous truck.

This travesty redoubles Jamylah’s resolve to restore their sacred burial mounds.  So, when the president telephones Jamylah, she asks that he find the warehouse of Giants for their reinterment, because it’s the right thing to do. Once this is achieved peace is restored and, in dream time, the Giants’ Moondance is held in Jamylah’s honor.

Considered a next-level children’s book, Jamylah and the Giants is a fact based and enlightening work that enhances vocabulary while entertaining and edifying all who read it.

Jamylah and the Giants is an incredible read that will keep children engrossed, enthralled and enchanted until the very last page. Jamylah and the Giants is a book that was so phenomenal and addictive and a book I believe children will find hard to put down! The combination of a thrilling story, incredible literature courtesy of Adrian Brooks Collins and the phenomenal characters, make Jamylah and the Giants a read not to be missed! That is why I urge all of you and your children to read and immerse yourself in this wonderful book! However, if you need more convincing, then read the rest of my review to hear more about this dazzling piece of literature!

Jamylah and the Giants is a sensational, unique and exciting children’s book that will take its readers on a journey like no other. The reader in Jamylah and the Giants will meet 8-year-old Jamylah, a young girl whose life is drastically changed when she discovers a race of ancient giants in Ohio. The reader will learn that Jamylah was approached to help restore the ‘burial mounds of the Giants’ after an accident and it becomes her mission to do just this.

However, along the way, many ups and downs will occur and she will find herself battling the Men in Black as they want to keep the Giants a secret and this book lovers is the short premise of the incredible Jamylah and the Giants!

Jamylah and the Giants for me was fascinating, captivating and addictive right from the start and I felt this from beginning to end! Even though I am an adult and this book is aimed at young readers! I felt this way thanks to the author and his unique premise as well as his bewitching literature.

Adrian Brooks Collins is a phenomenal writer who is not only amazing for his ability to captivate the reader’s attention straight away, but he is also an excellent author for his ability to lace exceptional twists and turns throughout her story! That will, in turn, have young readers shocked but hooked until the very end! The combination of Collins’s shocking twists and his explanatory powers will immerse the reader in the story and make them be able to visualize every detail, no matter how small. Which in turn will make young readers feel included in the voyage in the novel and will feel as if they are right there beside the characters in the book.

To conclude, Jamylah and the Giants is an exciting, compelling and memorable novel that will easily entertain readers for many days and nights and so I, of course, have to award this stellar gem of a book five stars! Be sure to have a preview below book lovers, you won’t regret it!